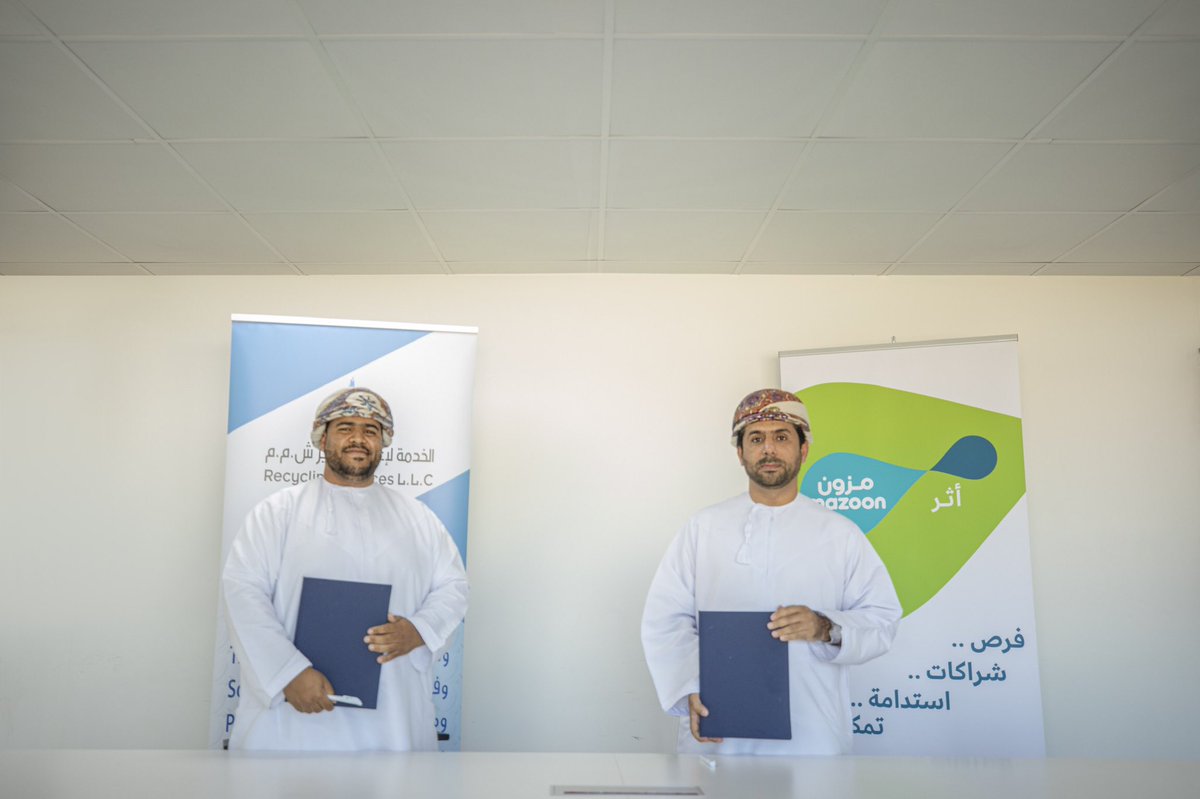 Mazoon Dairy Company signed an agreement on Wednesday to recycle plastic and solid waste with the Recycling Services Company. With this Mazoon Dairy seeks to recycle 90 per cent of its waste.
The agreement was signed by Ahmed bin Muhammad al Ghafri, Chief Support Officer, on behalf of Mazoon Dairy, while Mahmoud bin Abdullah al Ameri, CEO, signed on behalf of Recycling Services Company.
The agreement signing coincided with the Sultanate’s celebration of Omani Environment Day, which falls on January 8 every year. It is an expression of participation in the global and the national efforts to preserve and conserve the environmental resources with an emphasis on Omani rooted culture to cope up with the environmental issues.
“The agreement is the first of its kind in the Sultanate, as the company has spaces dedicated to sorting all kinds of waste and recycling within its facilities,” said the Chief Support Officer at Mazoon Dairy.
“This agreement will expand the company’s waste recycling scope to include more types and quantities of waste that go to other activities that include more types and quantities of plastic and solid waste. It is part of our social responsibility and our commitment towards efficient waste management resulting from our operations,” he said.
Mazen bin Hilal al Saadi, Director of Occupational Health, Safety and Environment of the company, said, “The amount of recycled and reused materials are estimated at 5 to 10 tonnes per day, as the organic waste is transferred to the biogas plant, and the solid waste will be recycled. The amount of plastic that will be recycled is estimated at 250 tonnes and will increase with the expansion of operations.”
The initiative, according to him, will achieve a quantum leap in terms of sustainability and preservation of the environment and within the environmental solutions that Mazoon Dairy has drawn up.”
Earlier also Mazoon Dairy Company worked on afforestation of its site in Al Sinaina in As’sallahiyah with 7,000 different types of trees, where the step of afforestation came after the completion of all construction work on the site, ensuring the operation of the sewage plant, and equipping modern irrigation systems. It has a variety of cultivated trees, including windbreaks, ornamental, and some fruit trees that are suitable for the desert environment. These programmes include sustainability plans, reducing emissions, and environmentally friendly solutions.
The company has also banned the use of plastic on its site through the distribution of environment-friendly bags from July last year. Under the initiative, environment-friendly bags were distributed among the people of Al Sinaina which became the first wilayat to ban the use of plastic bags.
Mazoon Dairy Company is the largest integrated dairy project in the Sultanate, with an estimated capital of RO 100 million. It is located in Al Sinaina in Al Buraimi Governorate and was built on an area estimated at 15 square kilometres.
The company was established in 2015 as a closed joint-stock company. It is the first 100 per cent Omani company in this sector, and it mainly works in the manufacture and distribution of a wide range of dairy products and juices.
The company has the latest dairy farm and a central processing plant. It started production operations in October 2019.
Its product consists of a wide range of products that include fresh milk, pasteurised milk, flavoured milk, yoghurt, ice cream, laban, cheese, juices, and many other products.