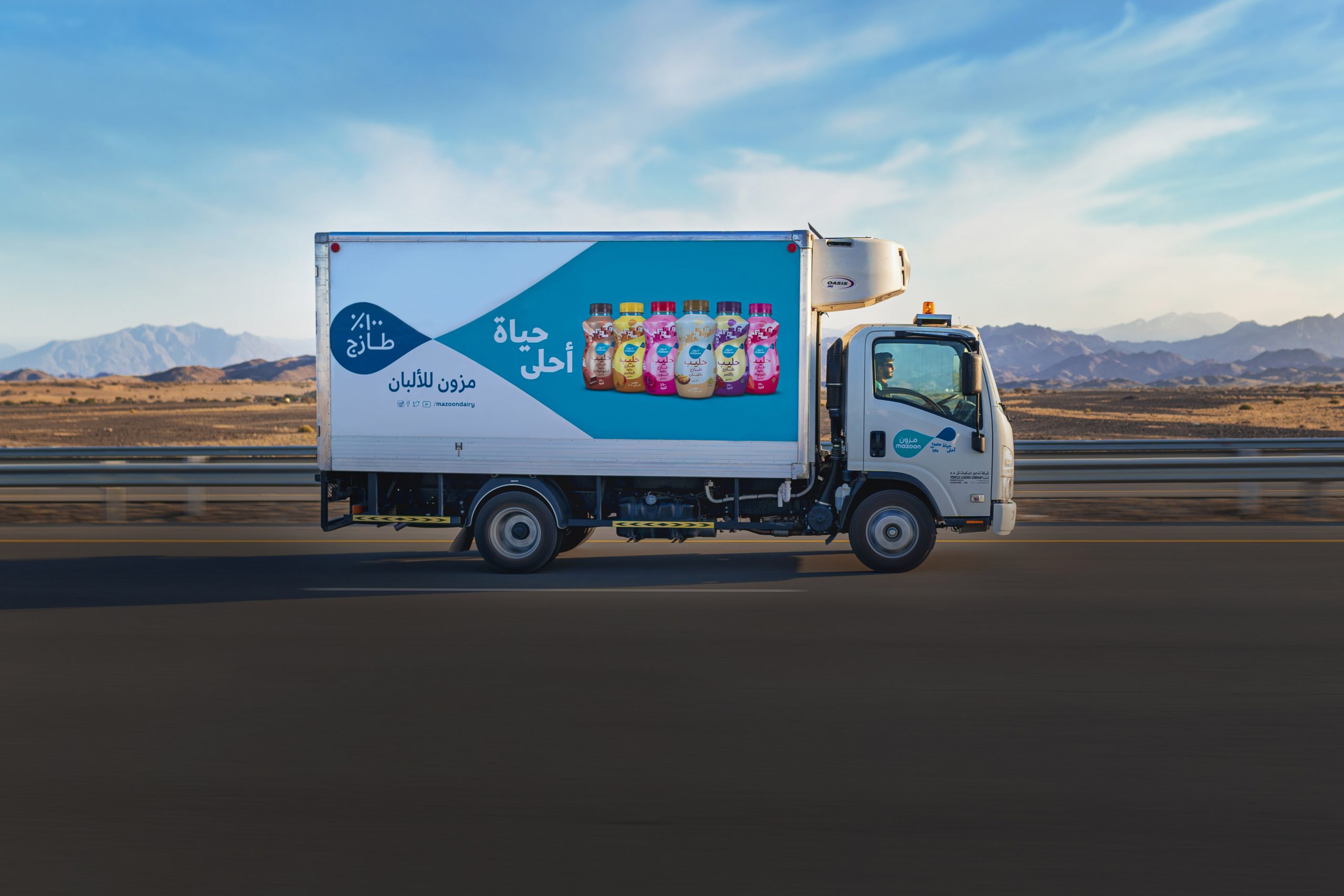 Muscat , October 2020: Mazoon Dairy Company celebrates its first anniversary , which coincides with the launch of its first products in the market on 20th of October 2019, where the company began distributing its products of fresh milk and fresh Luban in the governorates of Muscat and North Al-Batinah, while successes to cover all governorates of the Sultanate during the first hundred days of launching its operations.
Since it inception by laying its foundation stone Wilayat of Al-Suninah at the Governorate of Al-Buraimi in 2017, Mazoon Dairy Products Company has exerted its efforts and steady progress in the dairy industry, with the same ambitious spirit by which it has started its operational process , while it continues to open new sales lines across the governorates of the Sultanates .
During its successful march, Mazoon Dairy Company has launched a wide range of distinctive products that reflect its Omani identity and its innovative strength.
Mazoon Dairy has been launched within the initiatives led by the Oman Food Investment Holding Company, that owned by Oman Investment Authority , is an integrated project in the field of dairy industry aims to achieve self-sufficiency and reducing the Sultanate’s imports of dairy products.

The Farm:
The farm of Mazoon Dairy Company is a major component of the company’s facilities, as it is the most developed farm in the region in terms of technologies that used in the field of livestock care , including automatic transforming of dung into a closed and cooled area with temperature of 25 degrees Celsius .
Within the basic farm facilities there an advanced milking machine, which is fully automatic to accommodates 1000 cows per hour. The company also adopts the best practices recognized in this field.
The processing Plant:
On an area of 50 thousand square meters, the Plant of Mazoon Dairy Products consists of four basic units, including the main manufacturing unit, training building, plastic packaging Plant and service utilities.
The Plant is considered as one of the largest food processing facilities in the region with most advanced technology to produce 1million liters of dairy products per day. This is in line with Oman’s strategy to achieve self-sufficiency in the food sector and produce farm-fresh dairy that this is available to customers a few hours after production.
The company’s Plant includes 16 production lines, with an automation rate of 85%, while its building includes upper glass corridors that allow students and interested visitors to see the manufacturing processes in all its stages from the receipt of raw milk from the farm through the processing and packaging phase until it leaves the Plant to the market. The company also owns a plastic packaging unit to serve the company’s production operations.
Products MDC:
Mazoon Dairy provides a wide variety of 70 dairy products and their derivatives with distinctive flavors and juices of all types and sizes, while the company launched the fresh milk product as its first product, followed by the fresh milk , and other several dairy products.
Mazoon dairy products also include: flavored milk with flavors of “chocolate, strawberry, dates, rose, mango flavors, milk with turmeric flavor, milk with honey and milk with frankincense as the first flavored product of its kind in the world.
Its products also include, yogurt, salted Mazoon laban , fresh long-term milk and long-life milk flavored with chocolate, strawberry , fresh juices.
To keep space with consumers aspirations and in order to bring the company’s products to nearly 250 products of various type and sizes, a number of products will be launched within the upcoming weeks , such as ice cream, fresh labneh, fresh cream, cheese and butter .
Omanisation achievement through “Qudrat” Program:
As a response to the national priorities, Mazoon Dairy attaches utmost importance to creating job opportunities for Omani youth within its own well set programs.
By the end of October 2020, the number of company employees has reached to (730) employees in various key positions, supervisory and executive positions, while Omanisation percentage reached to 64% of the total employees.

The company pays great attention to empowering Omani youth through its “Qudrat” program, which was launched within the framework of the company’s endeavors to attract Omani youth and qualifying them to work in one of the most promising sectors in the Sultanate.

The “Qudurat” program adopts three main training tracks; which are: On-the-job training in the company’s various sectors under the supervision of colleagues and direct supervisors, training through specialized training institutes in the Sultanate or in similar companies outside the Sultanate, through training programs designed under the supervision of the company’s team.
The training program aims to provide the trainees with practical and theoretical aspects that prepare them for their future tasks, as well as training through companies that participate in the processes of establishing, equipping and supplying machines and equipment for some units of the company such as the farm and the Plant.
The company has also signed a number of agreements, training, and development with a number of institutions, including the “National Committee for Youth and the Ministry of labour, represented by the National Training Fund.

The social responsibility is an integral part of Mazoon Dairy activities, as the company in its first operational year focused on its employment, training and skills building, including supporting of educational activities, where it has supported a number of specific programs , supported the opening of a preparatory classroom at Al Sunainah Basic Education School in the Governorateof Al Buraimi.
During its first operational year, the company also participated in more than 25 occasions under exclusive sponsorship direct support, or through the provision of its products, most notably its exclusive sponsorship of the twenty-fifth Book Fair , where its sponsorship activities included the setting and operating the Child Theater and the organizing of 25 student trips from the schools of the Governorate of Buraimi to the Muscat International Book Fair.
The company also sponsored Al Shabiba Newspaper Educational quiz for schools, sponsored the first-of-its-kind gathering of twins in the Sultanate, and a number of events in higher education institutions, schools and local community organizations.

Mazoon Dairy Company facilities include the first-of-its-kind biogas plant in the region in Al Sunainah, which uses waste from cows to produce gas that is used as alternative energy to operate some facilities at the Plant. The project also includes advanced environmental solutions such as a special sewage plant that its outputs of water are being utilized in an irrigation system and in cleaning of some facilities of the company , as well as an indoor desalination plant to supply staff housing , the Plant and the farm by their by its needs of water.
The company’s farm currently includes 16 cowsheds, equipped with special troughs for collecting livestock manure, from where to be transported through special containers on a daily basis to the biogas plant.
In responding to the increase in the number of livestock, the company’s biogas plant will contribute to reduce dependence on diesel in operating some facilities of the company, which increases the efficiency of managing waste generated by the company’s operations, in addition to other solutions for managing other waste such as plastic in the Plant, using the treated wastewater which produced by the sewage plant in afforestation and in cleaning some facilities as well.

Continuous improvement of the work environment:
Mazoon Dairy always exerts its enough efforts to make its location at Wilayat of Al Sunainah, an attractive and comfortable work environment for employees, where several important social services are available , including , restaurants, gymnasiums, football felid, mosque, clinic and entertainment halls, in addition to continuous setting of social programs aimed at improving the lifestyle of the company’s employees .